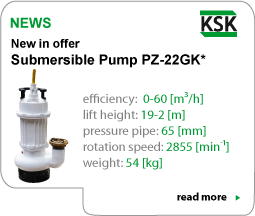 The PSZ-50C* pump is purposed for pumping clear and polluted water, as well as mud with permanent dirt with its diameter 15mm with the use of a mixer, strainer, closed impeller or up to 26mm with the use of open impeller and a bay in place of strainer.

The pumps has the ATEX certificate according to the Directive 94/9/WE for machines type I, M2 category, which allows to use the pump in underground mines, surface installments of these mines, which are endangered with the explosion of methan or coal ash.

Spinning one-stage pump. The impeller of the open or closed build attached directly to the stretched beam of the electric engine. The engine is divided from the water part with an oil compartment, and the beam going through it is protected with a double mechanical seal. From the body of the pump a pressue pipe is lead, which allows the attachement of a pressure cable.

The pump has a strainer, that makes the base of the pump. In case of the usage of the open impeller, a bay is attached instead of a strainer.